Who we are and What we Do 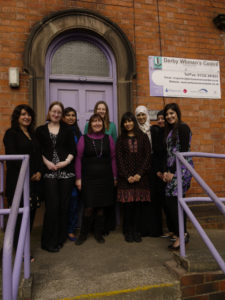 Our mission is to empower women to lead more independent lives. We aim to reduce economic inequality, improve mental well being and facilitate personal development. To do this, we offer support and guidance, signposting, counselling, legal advice and social activities and courses.

We provide a safe and non-judgmental environment for all women regardless of situation or background. Our services are completely confidential.

Derby Women’s Centre was founded in 1978. A group of local women began to hold meetings in their homes to discuss the needs of women. From this came a free pregnancy testing service, an advice helpline and Derby Rape Crisis. The centre was funded by donations and income generated by volunteers. In 1995, Derby Rape Crisis secured funding and moved to larger premises near to our current location on Leopold Street.

Our first ‘home’ was the Mandela Centre on Peartree Road.  In 1982, we moved to a small room in the Guild Hall in Derby, and expanded again to larger premises in Green Lane in 1986, which allowed us to offer a wider range of services and provide space to Hadhari Nari, a housing association which later became affiliated to Women’s Aid.

In 1990 we moved from Green Lane to our current premises on Leopold Street. This enabled us to offer accommodation to Karma Nirvana, a group formed by local women to assist others in making positive health choices. They remained with us until their move to the St James Centre in 1998.

We were also involved in the creation of Derby Women’s Work in June 2003 following a partnership with the Edge Project. In 2004, Women’s Work moved to their own premises and extended their services to include a nurse practitioner and counselling service.

Since then, we have established ourselves as a leading provider of general support services for local women.

Derby Women’s Centre are pleased to inform you that Creative Arts workshops are starting at the Cent...

We invite you to join us at our first coffee morning of the New year, which will take place on Wedne...

We are offering a limited number of Reflexology appointments on Tuesday’s.  At a cost of only...

Read More
The live chat is not available.
Send us a message via:
Facebook
or
Contact Us