Tips for Breaking the Insomnia Cycle 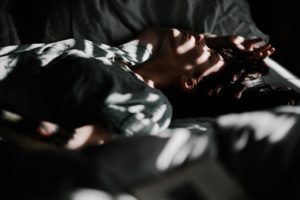 Most of us have nights when we can’t get to sleep but for some people, this happens pretty much all the time. As well as the obvious effects on your energy, this can also leave you feeling irritable and also has a strong link to mental health conditions such as anxiety and depression. Chronic insomnia can have a very detrimental effect on health and well-being. Here are some tips for breaking the cycle so you can get a better night’s sleep.

Insomnia is often thought of as lack of sleep but it can be a lot more complicated than that. Some people do have an ability to fall asleep and spend most of the night tossing and turning. Others can drop off but find themselves waking up repeatedly and struggle to get back to sleep.

The Effects of Lack of Sleep

The odd night without much (or any) sleep isn’t likely to do too much harm for your health but it’s a different story when lack of sleep becomes the norm.

Chronic insomnia can affect your health and well-being in a number of ways, including:

Weight Gain: One of the biggest effects can be on your weight. People who don’t sleep very well are more likely to be overweight. This is partly due to not having much energy after a restless night. The next day , you’re more likely to choose fatty, starchy foods to try to get an energy boost. Over time, this will have an impact on your weight and waistline. The other side of the coin is the effect that lack of sleep has on your metabolism. When you’re not getting enough sleep, there is an abundance of the ghrelin hormone and this encourages us to eat. At the same time, there is a lack of the leptin hormone that controls when to stop eating. The end result? Overeating and weight gain.

Poor Immunity: A chronic lack of sleep can lower your immunity and make you more susceptible to catching anything that’s going around. Sleep encourages the immune system to produce cytokines and antibodies. It’s also likely that it will take you longer to recover from illness and viruses.

Greater Risk of Chronic Illness: This situation means that you’re more likely to develop chronic illnesses and issues with the cardiovascular system such as heart disease, stroke and high blood pressure. If you already have high blood pressure, your blood pressure can stay elevated for the whole of the next day.

Mental Health Issues: Most of us know the feeling of not being able to focus properly after a bad night’s sleep but this can be hugely exaggerated if you have several restless nights in a row. With chronic sleeplessness, the brain doesn’t function as efficiently as it should and this can lead to problems such as lack of concentration, having trouble remembering things, difficulty in learning new things, and an inability to make decisions. Mood swings and low mood are also common. There is also a strong link between sleep and mental health problems such as anxiety and depression.

Some of the things that can help to improve your sleep patterns include:

– Getting up at a regular time each day even when you’ve slept badly. A lot of people with insomnia stay in bed later to try to catch up on the sleep they’ve missed but this rarely happens and can actually do more harm than good with the messages it sends to your brain.

– Avoiding caffeine and other stimulants that are likely to hinder your chances of falling asleep. Caffeine doesn’t allow deep sleep to happen. It’s best to stop drinking anything with caffeine in by mid afternoon.

Donation from the Congregation of Mickleover Methodist Church – Thank You

Derby Women’s Centre would like to thank everyone at Mickleover Methodist Church for the very...

We have been made aware of this helpful guide which helps to explain Menstrual Cycles and Mental Hea...

While Derby Women’s Centre do not directly support anyone under the age of 18 years, we recogn...